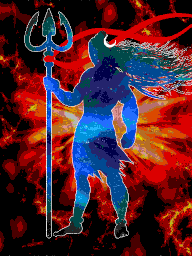 Clairvoyance is a regent god in the Skanda universe. He is the patron deity of awareness, compassion, unity, love, dreams, imagination, the arts, and knowledge. His cult is the oldest active cult in Rechtus, and one of three to survive the world's complete societal collapse. The Clairvoyant community is the largest and most active Calypsian sect in Rechtus and among its diaspora.

Clairvoyance is ascertained to have been created with the formation of Rechtus, alongisde his siblings Benediction and Mirth. From Clairvoyance's form, consciousness emerged.

PhiOrg has documented the figure of 'Clairvoyance', alongside the rest of the Calypsian Pantheon. The position has been assumed by two individuals, Clairvoyance the Elder and Clairvoyance the Younger. The Younger succeeded the aging Elder upon the latter's untimely death at the hands of the jealous god Predilection, resulting in the start of the fourth Rechtussian Götterdämmerung. The Younger still occupies the position as of this entry's authorship. The change in leadership has been detected in some Clairvoyant schools in the form of differences in visions, descriptions, and mannerisms correlated to Clairvoyance.

The Elder was born in the Proximal Heavens some time around 11,673 kZ to unknown minor gods. Very early in the records, Clairvoyance used his powers to interact with sophonts of various realms, settling on Rechtus solely around 11,675 kZ. The earliest physical records of Clairvoyance's cult on Rechtus date to 11,676 kZ, correlating to individuals residing on the fringes of society near the nation of Mugudt'ha.

Most PhiOrg researchers believe Clairvoyance the Elder's skanda was transferred to the body comprising Calypso, the attendant of Nicene Erklärung.

Clairvoyance the Younger was born in 12,015 kZ to the minor gods Volition and Serendipity, adopted by the Elder to take his place. The Younger quickly took to the ropes and lived up to his superior's image. His final lesson, on that of the laws of action, was given immediately before the fourth Götterdämmerung. Clairvoyant attempted to stay out of most of the conflicts, instead focusing his efforts to his followers. The only major exception was his plot to dismantle Predilection, which lasted most of the conflict.