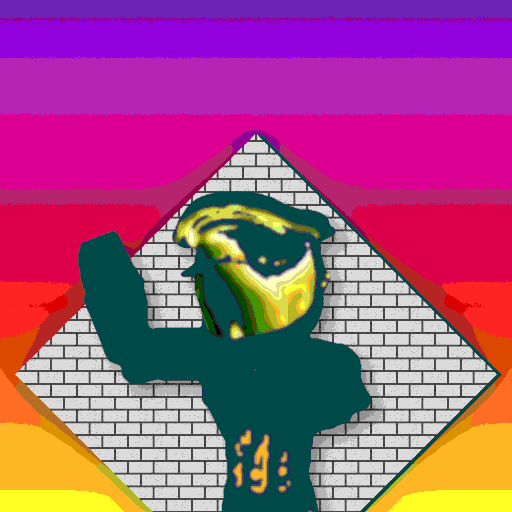 The Wanderer is an epithet given to one of the most illusory forms of Ræl. It is the oldest and the youngest, the bearer of a million names; the most ephemeral and yet the least intermittent.; the creator and the devotee. The Wanderer’s history begins back in the hazy year of 12012 HE, when they first appeared in the metaverse. Like a young Krishna, this lad waltzed through the multiverse freely using their creative and imaginative powers - but unlike the former, their intents soon became sporadic and malicious in nature.

The Powers That Be were unpleased with this individual, and cursed them to wander the multiverse forever searching for a seemingly unobtainable feat - the perfect bathroom. The Powers That Be christened this individual as “The Wanderer”, knowing their pursuit of such a task would be impossible, and forever made this image of the perfect bathroom present in The Wanderer’s mind.

Frustrated with this existence, The Wanderer tried many tricks to leave their flesh prison, including suicide, but gave up after discovering their consciousness was forever to roam without seeking the bathroom. Spending centuries searching for the bathroom, witnessing the rise and fall of worlds, The Wanderer decided to try other methods to speed their journey - interdimensional travel, body swapping, cryostasis, time travel - all to no avail. Memories from six centuries prior would fade from their mind, often resulting in The Wanderer treading the same ground repeatedly without knowledge of their previous presence. Making this a habit, The Wanderer would periodically enter their secret facility, located roughly five kilometers under the foundation of Atkins Park in Smyrna, Georgia. There, they would enter cryostasis, a predesigned interdimensional portal, or body altercation chamber to begin the next search. The oldest chambers and facilities in the room date back to the 65th century BCE - fashioned by a disgruntled demoness overshooting the 21st century on her time dials.

Their wandering finally ended some time around 23:30 EST on July 27th, 12020, when he (assuming the form of a human male) peacefully died in the liberation of his own bathroom. Upon boarding a flight to the greater Robloxian metro area, The Wanderer had relieved himself in one of the on board bathrooms, which he immediately recognized as the bathroom he had been looking for all these years. Euphoric, The Wanderer proceeded to lock the bathroom for as soon as the plane began liftoff. Passengers, flight attendants, and the captain himself all tried to pry The Wander away from the bathroom to no avail. Realizing he will never live this peacefully ever again, The Wander used the last bits of a telekinetic device he possessed to control the captain and force a crash landing outside of Azammon city. Killing him and the other passengers of the plane in the process, The Wanderer’s 601,729 conscious years (and countless millions of unconscious years) of searching had come to an end.

Though the Wanderer may finally be at peace, their past incarnations are far from liberated. Their many forms - man, woman, nonbinary, dinosaur, deity, rockstar, researcher, pirate, cleric, teacher, thief, Peter Griffin, infant, engineer, outlaw, leader, servant - still live on in the multiverse to you and I. The thousands, possibly millions, of The Wanderers still in existence each have their own 600-year long story to tell.